A child studying in the Ashram school, perhaps bored with his studies, once asked the Mother(Mirra Alfassa) how studying mathematics, history or sciences could help him in Yoga.  She replied, “They can help in several ways:

In order to succeed in the sciences, one has to overcome failure, frustration and depression and develop a keen sense of observation, dispassion, persistence and concentration.  These same qualities are also required in the path of Yoga.  The Yogin has to possess the dispassionate detachment of a scientist in order to separate the hallucinations from spiritual experiences.  Otherwise, if the mental being or the vital being are unstable, powerful spiritual experiences can easily lead to delusions.

With regard to the first point above, the Mother (Mira Alfassa) stated:

A true mental education, which will prepare man for a higher life, has five principal phases. Normally these phases follow one after another, but in exceptional individuals they may alternate or even proceed simultaneously. These five phases, in brief, are:

(1) Development of the power of concentration, the capacity of attention.  To love to learn is the most precious gift that one can give to a child: to love to learn always and everywhere, so that all circumstances, all happenings in life may be constantly renewed opportunities for learning more and always more.  For that, to attention and concentration should be added observation, precise recording and faithfulness of memory.  The growth of the understanding should be stressed much more than that of memory. One knows well only what one has understood.  Things learnt by heart, mechanically, fade away little by little and finally disappear; what is understood is never forgotten.

(2) Development of the capacities of expansion, widening, complexity and richness.  In order to increase the suppleness and comprehensiveness of his mind, one should see not only that he studies many varied topics, but above all that a single subject is approached in various ways, so that the child understands in a practical manner that there are many ways of facing the same intellectual problem, of considering it and solving it.

(3) Organisation of one’s ideas around a central idea, a higher ideal or a supremely luminous idea that will serve as a guide in life.

(4) Thought-control, rejection of undesirable thoughts, to become able to think only what one wants and when one wants.  This means that every thought entering the mental consciousness should be set before the central idea; if it finds a logical place among the thoughts already grouped, it will be admitted into the synthesis; if not, it will be rejected so that it can have no influence on the action. This work of mental purification should be done very regularly in order to secure a complete control over one’s actions.

(5) Development of mental silence, perfect calm and a more andmore total receptivity to inspirations coming from the higher regions of the being .

The Mother, On Education: Mental Education

The rest of the post discusses the second and third points raised above.

Einstein’s equation states that Matter and Energy are interconvertible.   Conversion of mass into energy is well-known while the reverse process of  converting energy into matter (subatomic particles) occurs in particle accelerators.  Ancient Indian philosophy goes further to state that Matter and Mind are just different grades of the same energy, different organizations of the one conscious force of  existence.  It regards Matter as a condensation of Consciousness(i.e.Brahman).  The Universe with its physical and supraphysical worlds is a manifestation of Consciousness with different orders of Space-Time. The Yogin who attains Enlightenment experiences these seemingly startling assertions as living reality.  He/she is able to discern the unreality of appearances (i.e. the solidity of Matter) by shifting the center of his consciousness and awakening into occult worlds which are subtler than the physical world and in which Time moves slower than over here. 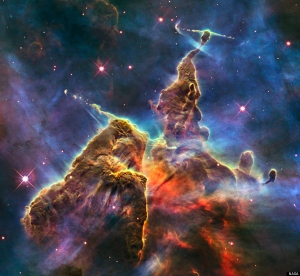 Nature has endowed its work with a marvellous underlying symmetry (see symmetries in physics, symmetries  in biology and symmetries in chemistry).   Symmetries in physics correspond to conservation laws as Emmy Noether demonstrated with Noether’s theorem.  Shive and Weber expatiate on how energy is transported across a variety of media in the form of waves, and how these waves, although propagating in different media, exhibit similar phenomena such as resonance, interference, dispersion, scattering, shock waves, diffraction and refraction[1].  They also expound on the analogies which exist across thermal, electrical, acoustic and mechanical systems.  For example, thermal noise appears as brownian motion in fluids, johnson noise in electrical systems, blackbody radiation in optics and also as acoustic thermal noise.

Pikovsky et al lucubrate on how Nature synchronizes phenomena as diverse as clocks, singing crickets, cardiac pacemakers and firing neurons using the mechanism of coupled oscillators – forced or natural, chaotic or periodic – through the influence of phase, amplitude or frequency [2].

Limitations of the Intellect

Sri Aurobindo, The Synthesis of Yoga – I: The Purified Understanding

All said and done, what has been discussed above is still cognitive knowledge and should be regarded only as a preparation of the consciousness.   There are always exceptional seers like Ramakrishna Paramahansa and Ramana Maharshi, who are able to transcend this process and directly attain Divine Illumination.  Sri Aurobindo clarified the limitations of the intellect in a letter to a disciple.

Do not confuse the higher knowledge and the mental knowledge. The intellectual man will be able to give a wider and more orderly expression to what higher knowledge he gets than the homo psychicus; but it does not follow he will have more of it. He will have that only if he rises to an equal width and plasticity and comprehensiveness of the higher knowledge planes. In that case he will replace his mental by his above-mental capacity. But for many intellectuals, so-called, their intellectuality may be a stumbling-block as they bind themselves with mental conceptions or stifle their psychic fire under the heavy weight of rational thought.  On the other hand, I have seen comparatively uneducated people expressing higher (spiritual) knowledge with an astonishing fullness and depth and accuracy which the stumbling movements of their brain could never have allowed one to suppose possible.

Sri Aurobindo, Letters on Yoga – III: Transformation of the Mind – I

True Yoga begins when the consciousness withdraws from surface personality(physical body) and discovers the inner being (subtle body) which sits passive within.  This initiation works as follows

There are two mutually complementary movements; in one the inner being comes to the front and impresses its own normal motions on the outer consciousness to which they are unusual and abnormal; the other is to draw back from the outer consciousness, to go inside into the inner planes, enter the world of your inner self and wake in the hidden parts of your being.  When that plunge has once been taken, you are marked for the yogic, the spiritual life and nothing can efface the seal that has been put upon you. This inward movement takes place in many different ways and there is sometimes a complex experience combining all the signs of the complete plunge. There is a sense of going in or deep down, a feeling of the movement towards inner depths; there is often a stillness, a pleasant numbness, a stiffness of the limbs.  This is the sign of the consciousness retiring from the body inwards under the pressure of a force from above, – that pressure stabilising the body into an immobile support of the inner life, in a kind of strong and still spontaneous asana. There is a feeling of waves surging up, mounting to the head, which brings an outer unconsciousness and an inner waking. It is the ascending of the lower consciousness in the Adhara to meet the greater consciousness above. It is a movement analogous to that on which so much stress is laid in the Tantric process, the awakening of the Kundalini, the Energy coiled up and latent in the body and its mounting through the spinal cord and the centres (cakras) and the Brahmarandhra to meet the Divine above.

Sri Aurobindo, Letters on Yoga – II: Experiences of the Inner and the Cosmic Consciousness – I 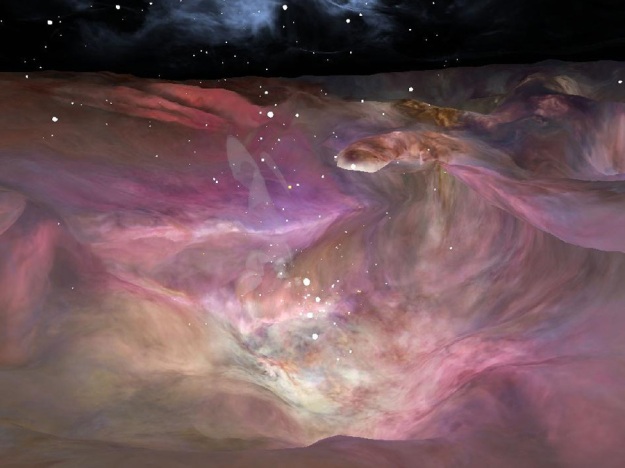 Orion Nebula in 3D via the Hubble

28 thoughts on “Study of science as an aid in Yoga”