A particularly intransigent problem in the practice of Yoga is that of retention of power; the fleeting contact that one gains with the Higher Power during meditation seems to dissipate within a few minutes after meditation, after which one finds oneself uncomfortably thrust back into the ugly daily persona – an amalgam of anxiety, impatience, ambition and what not.   The way out of this dilemma is to embrace a daily regimen of  control over conversation, food, television and computer usage and other activities which “externalize” the consciousness.  The exercise discussed in this article “walking with eyes unfocused” can also extend the retention of consciousness.

When we are busy with various daytime activities, we are seldom aware that our consciousness is perpetually recording even the tiniest upheavals occurring within our mind and heart.   These upheavals invariably sink into our subconscious, gradually gain strength to become habit formations and also rise up later at night in the form of incoherent dreams.   While this recording cannot be prevented, its ill-effects can be mitigated by the practice of  walking meditation, which calms the volatile waking consciousness by temporarily inhibiting the churning in the mind and the heart. One can potentially experience a peace and calm descending and saturating the mind, heart and the rest of the frontal being

Exercise: Walk alone for long stretches while allowing the eyes to lazily scan the horizon.  Without focusing on anything in particular, one’s vision should take in all the objects (people, buildings, trees) which appear within sight without  getting distracted by any of them.  There should be no conversation within oneself or with another person.  Chant a Mantra if required to improve the effect. 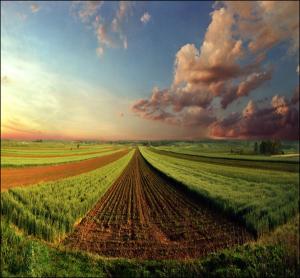 Carlos Castaneda on this exercise

(The most prominent reference to this exercise is in the works of Carlos Castaneda, which we excerpt here.)

At the beginning of our association don Juan had delineated another procedure: walking for long stretches without focusing the eyes on anything. His recommendation had been to not look at anything directly but, by slightly crossing the eyes, to keep a peripheral view of everything that presented itself to the eyes. He had insisted, although I had not understood at the time, that if one kept one’s unfocused eyes at a point just above the horizon, it was possible to notice, at once, everything in almost the total 180-degree range in front of one’s eyes. He had assured me that that exercise was the only way of shutting off the internal dialogue (i.e stop the thought process). He used to ask me for reports on my progress, and then he stopped inquiring about it.

I told don Juan that I had practiced the technique for years without noticing any change, but I had expected none anyway. One day, however, I had the shocking realization that I had just walked for about ten minutes without having said a single word to myself.

I mentioned to don Juan that on that occasion I also became cognizant that stopping the internal dialogue involved more than merely curtailing the words I said to myself. My entire thought processes had stopped and I had felt I was practically suspended, floating. A sensation of panic had ensued from that awareness and I had to resume my internal dialogue as an antidote.

“How does the right way of walking stop the internal dialogue?” I asked.

“Walking in that specific manner (described above) saturates the tonal”, he said. “It floods it. You see, the attention of the tonal has to be placed on its creations. In fact, it is that attention that creates the order of the world in the first place; so, the tonal must be attentive to the elements of its world in order to maintain it, and must, above all, uphold the view of the world as internal dialogue.”  He said that the right way of walking was a subterfuge. The warrior, first by curling his fingers, drew attention to the arms; and then by looking, without focusing his eyes, at any point directly in front of him on the arc that started at the tip of his feet and ended above the horizon, he literally flooded his tonal with information. The tonal, without its one-to-one relation with the elements of its description, was incapable of talking to itself, and thus one became silent.

Don Juan explained that the position of the fingers did not matter at all, that the only consideration was to draw attention to the arms by clasping the fingers in various unaccustomed ways, and that the important thing was the manner in which the eyes, by being kept unfocused, detected an enormous number of features of the world without being clear about them. He added that the eyes in that state were capable of picking out details which were too fleeting for normal vision.

Other references to this exercise

”The other story is of the days Sri Aurobindo had the habit of walking up and down in his rooms. He used to walk for several hours like that, it was his way of meditating. Only, he wanted to know the time, so a clock had been put in each room to enable him to see the time at any moment. There were three such clocks. One was in the room where I worked; it was, so to say, his starting-point. One day he came and asked, “What time is it?” He looked and the clock had stopped. He went into the next room, saying, “I shall see the time there” — the clock had stopped. And it had stopped at the same minute as the other, you understand, with the difference of a few seconds. He went to the third room…the clock had stopped. He continued walking three times like that — all the clocks had stopped! Then he returned to my room and said, “But this is impossible! This is surely a bad joke!” and all the clocks, one after the other, started working again. I saw it myself, you know, it was a charming incident.”

15 thoughts on “Walking with eyes unfocused”