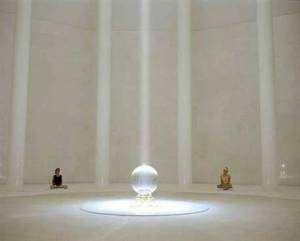 Firstly, it is important to understand that All thoughts come from outside.

Overview of methods: For an overview of the various ways to stabilize the mind, see Taming the Monkey Mind.  In the same vein, see Gorakhnath’s enumeration of contemplation methods and the Vijnana Bhairava Tantra

Gradations in mental development: The mind cannot immediately  attain a state of silence.  It must be progressively strengtheneed.  This is discussed under Types of Meditation and Stages of meditation.

Contemplation on vastness: You can fix your awareness on the sky or the lake as shown in Widen the consciousness. With progress, the awareness shifts to the inner sky(planes of the mind). See also : Meditation Techniques from the Yoga Upanishads

Contemplation on deity: Those who are of devotional nature can practice Concentration on Mother’s photograph

Daily exercise: To relax the mind during the day, try Walking with eyes unfocused

Before sleeping: A contemplation exercise before going to sleep

Pitfalls to watch for during meditation :See the two articles:

The rest of this page covers the practice of concentrating on centers within the body.

In the words of Pavitra, a disciple of Sri Aurobindo

Select a quiet and secluded place where you will feel secure and undisturbed for at least three quarters of an hour to one hour.

Sit in a chair or an arm chair with the back resting or, if you prefer, cross-legged on a cushion or a carpet. A straight body is preferable but without strain. In fact posture is of little importance. What is important is to feel at ease so that the body can be rapidly forgotten. Recumbent position is not advisable, except in case of illness or incapacity as it induces sleep.

Always begin the meditation by an inner call or a prayer, an aspiration towards the Divine.

a) A first method consists in watching the thoughts as they swarm about in the mind. Your mind is like a public place across which thoughts move in and out. A few attract your attention and remain a longer time. Observe their play without identifying yourself with any of them. You will become aware that your consciousness-that is your mental self-stands apart like a “Silent Witness” Separate from the movements of the mental nature in you. On one side this “Witness Consciousness”, on the other the mental nature in you.

Because you refuse to identify yourself with the thoughts, their motion and insistence gradually weaken. The waves of the mental nature subside and after a time you enter into a state called “quietude” or “quiet mind”. Thoughts still occur but they are subdued and do not disturb inner perceptions.

b) Another method of mental control consists in creating a void in your mind. It is quicker and more radical than the first but also more difficult. You have to banish altogether all thoughts from the mind. As soon as one comes in, push it out or discard it right away, before it has time to settle down. Not only should all reasonings be excluded in this way but all memories and associations too. Your mind enters gradually into the peace of “quietude”.

You should know that such an attempt to forcefully control the mind results at times in an apparent increase of the mental chaotic condition. Don’t be disturbed but persevere.

It is possible to bring the mind to a state of complete “silence”. But it is a very arduous task and after all it is not indispensable, at least in Sri Aurobindo’s “Integral Yoga”, which does not aim at leaving the body in trance, but at reaching the same experiences in a perfectly conscious and wakeful state.

c) Mental control can also be brought about by concentration, that is the fixing of the mind on a single object so strongly that the mind unites, so to say, with the object. From this identification knowledge about the object arises in the mind. The best object of concentration, the most worthy of knowledge, is surely the Divine, the Supreme. It matters little whether it is the Impersonal or the Personal God or, subjectively, the One Self. An idea that will help you is “God in all, all in God and all as God”. When the mind wanders away, you have to bring it back to its object quietly bur persistently. Here also you dissociate yourself in away from your mind.

You may also use a word, a significant sentence, a prayer, the silent repetition of which will quieten the most mechanical part of your mind. Such a repetition (the name of the Beloved) is frequently resorted to by those who feel a devotion for the Divine. It is best to use these three methods concurrently according to the need and as it seems easier at the moment. In any case regular practice is necessary every day, preferably at the same hour.

Three centres on which one can concentrate during meditation

One can concentrate in any of the three centres which is easiest to the sadhak(aspirant) or gives most result.

The power of the concentration in the heart-centre is to open that centre and by the power of aspiration, love, bhakti, surrender remove the veil which covers and conceals the soul and bring forward the soul or psychic being to govern the mind, life and body and turn and open them all fully to the Divine, removing all that is opposed to that turning and opening. This is what is called in this yoga the psychic transformation. (On a side note, the techique of concentration on the heart is called Dahara Vidya in the Upanishads )

The power of concentration above the head is to bring peace, silence, liberation from the body sense, the identification with mind and life and open the way for the lower (mental, vital, physical) consciousness to rise up to meet the higher consciousness above and for the powers of the higher (spiritual nature) consciousness to descend into mind, life and body. This is what is called in this yoga the spiritual transformation. If one begins with this movement then the Power from above has in its descent to open all the centres (including the lowest centre) and to bring out the psychic being; for until that is done there is likely to be much difficulty and struggle of the lower consciousness obstructing, mixing with or even refusing the Divine Action from above. If the psychic being is once active this struggle and these difficulties can be greatly minimised.

The power of concentration between the eyebrows is to open the centre there, liberate the inner mind and vision and the inner or yogic consciousness and its experiences and powers. From here also one can open upwards and act also in the lower centres; but the danger of this process is that one may get shut up in one’s mental spiritual formations and not come out of them into the free and integral spiritual experience and knowledge and integral change of the being and nature. If one concentrates on a thought or a word, one has to dwell on the essential idea contained in the word with the aspiration to feel the thing which it expresses.

Pavitra: In meditation the entire mind is quiet. The faculty of forming images disappears and also that of reasoning, of putting out ideas. And I remain immobile, incapable of any inner movement. There is no change in the consciousness, only in the instruments of this conscious­ness. What should I do in meditation? Should this new state be brought into the ordinary life?

Sri Aurobindo: In the first analysis, the mind is divided into two parts : one, whose movements are aroused by Nature ; the other which shares the nature of the Purusha and remains immobile. It is now necessary to extend the power of this immobile part to remain the witness of the changes of the other. Thought will seem to occur in front of it, and it will become aware that it is universal Nature which raises the play of thoughts. One must go towards this universalisation. Thoughts will come from outside and you will see them taking shape in you. You will also experience that you have power over them: you will be able to make a choice, refuse a movement, etc. This is the beginning of mastery. The part of the immobile mind will also have to be seen as the reflection of a vaster, more universal Purusha above you. From both sides you must free yourself from the self. You must relax the pressure you have put on the mind to succeed in mastering thought and being free from it. Insist on the wit­ness attitude. When a thought comes, examine it, see from where it comes, follow it.

The two parts which you are thus separating will have to be later united once again.

Pavitra: Are there not two methods? One consists in looking at the thoughts as they cross the field of the mind. The other in losing consciousness of them by concentrating upon the inner movement?

Sri Aurobindo: I think you can now enter the second movement. And you must keep in mind that the more you can overcome the idea of working by yourself, the quicker you will go. Allow things to be done for you.

Another presentation by the Moscow Integral Yoga group

Click on the book to go to the SABDA catalog