How do we in the role of the subject perceive an object?   What is the state of our consciousness with respect to the object ?  This is referred to as the epistemology of perception. In this post, I will first survey perception (Pratyaksha) as outlined by Vedanta and Tantra and then discuss how  Sri Aurobindo augmented this theory in the light of his own supramental experiences.   By giving new meaning to the four terms Vijnana, Prajnana, Samjnana and Ajnana listed in the Aitereya Upanishad, Sri Aurobindo presented a fresh perspective on the epistemology of perception.

According to Indian philosophy, it is One Consciousness (Brahma-Chaitanya) which has “become” (i.e. which underlies) the world in its various forms such as man, animals, plants and even the supposedly inanimate objects.  Everything has the same consciousness within it although the outward expression differs in degree and intensity.   In the phenomenal world, consciousness has veiled its full power and plunged into what may be called  (spiritual) Ignorance or Nescience.   In case of the supposedly inanimate mineral kingdom, this consciousness is said to be veiled by a state of inertia (Tamas).  This veiling is denoted as Maya (Illusion) and it is this Nescience which is the cause of all empirical distinctions between the Knower, the Known and Knowledge.  There would be no Nescience if we were fully conscious because then the distinction between subject and object would not exist; everything we perceive would be seen as part of the One Self.  The act of perception must be understood in the light of this ontological background.   Every act of perception (Pratyaksha) may be regarded as a attempted realization of the One Self by an unveiling of the nescience which currently exists between the subject-consciousness and the object-consciousness, the Knower and the Known.

The phenomenon of perception can be illustrated in the words of tenth century Indian philosopher, Vacaspati Mishra, who said: “Every one who deals with an object first intuits it, then reflects upon it, then appropriates it, and then resolves or determines, this is to be done by me, and then he proceeds to act.”   In accordance with this example, it is possible to identify three stages of perception[1]:

The figure below is a picturesque view of the division that occurs in the mind during the second (determinate apprehension) and third (cognition) stages described above. 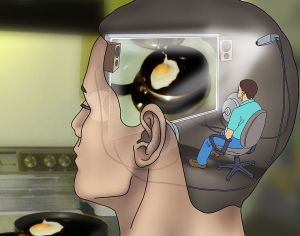 The various ancient Indian schools of philosophy such Nyaya, Mimansaka, Sankhya, Jaina, Buddhism, Vedanta offered their own variants on the epistemology of perception.  The  full discussion of these variants can be read in Jadunath Sinha‘s excellent two-volume set Indian Psychology. (link)

Arthur Avalon in his book Serpent Power presents the perspective of Tantra on perception.   Tantra denotes the object as Artha and subject as Sabda.   The part of the mind which becomes the object, which images the object within the subject-consciousness, is called subtle Artha.    The other part of the mind, which cognizes this subtle image, is denoted as subtle Sabda.

The object perceived is called Artha, a term which comes from the root “Ri” which means to get, to know, to enjoy.  Artha is that which is known, and which therefore is an object of enjoyment.  The mind as Artha-that is, in the form of the mental impression-is a reflection of the outer object or gross Artha.  As the outer object is Artha, so is the interior subtle mental form which corresponds to it. That aspect of the mind which cognizes is called Sabda or Nama (name), and that aspect in which it is its own object or cognized is called Artha or Rupa (form). The outer physical object of which the latter is, in the individual, an impression is also Artha or Rupa, and spoken speech is the outer Sabda. Subject and object are thus from the Mantra aspect Sabda and Artha-terms corresponding to the Vedantic Nama and Rupa, or concepts and concepts objectified. As the Vedanta says, the whole creation is Nama and Rupa. Mind is the power (Sakti), the function of which is to distinguish and identify (Bheda samsarga-vrtti Sakti).   Perception is dependent on distinguishing and identification.  In the perception of an object that part of the mind which identifies and distinguishes, or the cognizing part, is subtle Sabda, and that part of it which takes the shape of the object (a shape which corresponds with the outer thing) is subtle Artha.  The perception of an object is thus consequent on the stimultaneous functioning of the mind in its twofold aspect as Sabda and Artha, which are in indissoluble relation with one another as cognizer (Grahaka) and cognized (Grahya). Both belong to the subtle body. [2]

Sri Aurobindo augmented the Vedantic theory of perception based on his spiritual experience of the Supramental World (Maharloka or Vijnanaloka).  In this world, ideas are not abstractions but always concrete realities inseparable from the objects they define.  A good example of this would be simultaneously experiencing the power of the burning light and the substance of the fire within it Sri Aurobindo, The Life Divine – I: The Supermind as Creator.  He coined the term Real-Idea to define this experience.

On the plane of mind you have abstractions. It is the mind’s way of representing realities of planes higher than the mind. Behind these abstractions there is a Reality. On the plane above the mind there are no abstractions, there are realities and powers. For instance, you form an abstract idea in the mind about the Supermind. When you get to the Supermind you find it is not an abstraction at all. It is more intensely concrete than Matter, something quite overwhelming in its concrete-ness. That is why I called it the Real-Idea and not an “abstract idea”. In that sense there is nothing more concrete than God. Even if we were on the pure mental plane we would find mind much more concrete and real. But as we are on the physical plane we always think the mind more abstract. Before the Supermind, Matter dwindles into a shadow. [3]

The supramental consciousness can be said to have two powers – apprehension and comprehension.

This which is the heart, is mind also. Concept and will and analysis and wisdom and intellect and vision and continuity of purpose and feeling and understanding, pain and memory and volition and application3 of thought and vitality and desire and passion, all these, yea all, are but names of the Eternal Wisdom.

We will now analyze the varied actions of these powers of consciousness in the three stages of spiritual growth of Man.

Perception in the Unilluminated Mind

The unilluminated mind proceeds from ignorance to knowledge.  It’s primary power is apprehension (in the form of Samjnana and Prajnana) and then it tries to imperfectly gain comprehension (as Vijnana and Ajnana).  Sri Aurobindo defined the act of perception as follows.

As our human psychology is constituted, we begin with Samjnana, the sense of an object in its image; the apprehension of it in knowledge(Prajnana) follows.  Afterwards we try to arrive at the comprehension of it in knowledge (Vijnana) and the possession of it in power(Ajnana). There are secret operations in us, in our subconscient and superconscient selves, which precede this action, but of these we are not aware in our surface being and therefore for us they do not exist. If we knew of them, our whole conscious functioning would be changed.

Sri Aurobindo, Kena and Other Upanishads: The Supreme Sense

Comparing these terms to the Vedantic theory, the correspondence can be identified as

Perception in the Intuitive Mind

When the consciousness rises to the Intuitive Mind, one develops the four powers of Intuition – Revelation or Drishti, Inspiration or Sruti, Intuition or Smriti and Discrimination or Viveka Sri Aurobindo, The Synthesis of Yoga – II: The Gradations of the Supermind. The functioning of Vijnana is now half-awakened.   As Sri Aurobindo states in one of his unfinished commentaries on the Upanishads, Smriti(Intuition) is the link between Vijnana(Knowledge by Identity) and Prajnana(apprehension) because Smriti is innate perception; it is the latent memory of the truth which rises when within our consciousness, we have momentarily unified with the object-consciousness.

A still more indirect action of the vijnana is smriti; when the truth is presented to the soul and its truth immediately & directly recognised by a movement resembling memory—a perception that this was always true and already known to the higher consciousness. It is smriti that is nearest to intellect action and forms the link between vijnanam & prajnanam, ideal thought & intellectual thought, by leading to the higher forms of intellectual activity, such as intuitive reason, inspiration, insight & prophetic revelation, the equipment of the man of genius.

Sri Aurobindo, Kena and Other Upanishads: A Fragmentary Chapter for a Work on Vedanta

Perception in the Supramental Mind

In the fully supramentalized being, the primary power is comprehension while the powers of apprehension become a secondary capability. As Sri Aurobindo defines it:

The basis of its action of the world will be the perfect, original and all-possessing Vijnana and Ajnana. It will comprehend all things in its energy of conscious knowledge, control all things in its energy of conscious power. These energies will be the spontaneous inherent action of its conscious being creative and possessive of the forms of the universe.  What part then will be left for the apprehensive consciousness and the sense? They will be not independent functions, but subordinate operations (Prajnana and Samjnana) involved in the action of the comprehensive consciousness itself.  In fact, all four there will be one rapid movement. If we had all these four, acting in us with the unified rapidity with which the Prajnana and Sanjnana act, we should then have in our notation of Time some inadequate image of the unity of the supreme action of the supreme energy.

If we consider, we shall see that this must be so. The supreme consciousness must not only comprehend and possess in its conscious being the images of things which it creates as its self-expression, but it must place them before it — always in its own being, not externally — and have a certain relation with them by the two terms of apprehensive consciousness. Otherwise the universe would not take the form that it has for us; for we only reflect in the terms of our organisation the movements of the supreme Energy. But by the very fact that the images of things are there held in front of an apprehending consciousness within the comprehending conscious being and not externalised as our individual mind externalises them, the supreme Mind and supreme Sense will be something quite different from our mentality and our forms of sensation. They will be terms of an entire knowledge and self-possession and not terms of an ignorance and limitation which strives to know and possess.

Sri Aurobindo, Kena and Other Upanishads: The Supreme Sense

13 thoughts on “Epistemology of perception”