Napoleon once remarked that a great general must have equilibrium:  “The object most desirable is that a man’s judgment should be in equilibrium with his physical character or courage. This is what we may call  being well squared both by base and perpendicular. If courage be in the ascendency, a general will rashly undertake that which he can not execute; on the contrary, if his character or courage be inferior to his judgment, he will not venture to carry any measure into effect”[1].

The path of Yoga calls for a similar stable poise in order to facilitate an effortless surrender to the Divine.  If you push too hard, the mind clogs up and you enter a phase of listlessness because the Divine Light cannot penetrate the mental layer, but if you relax too much, you can succumb to past subconscious vulnerabilities that get rekindled.  The Gautama Buddha also had to learn this essential lesson.  Before he  attained Enlightenment, he had practiced such extreme self-mortification that his body had become reduced to a skeleton bringing his spiritual progress to a halt.  By some fortuitous coincidence, a dancing girl happened to be passing by singing the song:

(*the Sitar  : an Indian musical instrument)

The Buddha realized that the song contained a hidden message for him: he had to maintain a balance even while adhering to a steady discipline.  He began eating food regularly.  The rest, as we now know, is history! 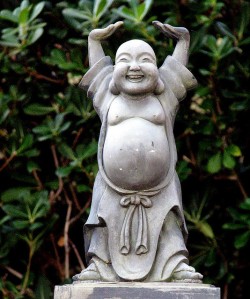 A disciple suffering from a comparable pathology once asked the Mother for the solution to the dilemma.  The Q&A is as follows:

Disciple: “In the inner life, why are there periods when one can no longer make a conscious effort, and if one enforces it, parts of the nature revolt or else everything in the being seems to become petrified; effort becomes the mechanical repetition of past movements. What should be done at such times?”

Mother: This has been very well observed.

What is not mentioned here is the nature of the effort, for it is a certain kind of effort which leads to the result described here, which is either a revolt or a sort of—yes, petrifaction, truly, something that becomes absolutely insensible and no longer responds at all to this effort. This happens when the effort is almost exclusively mental and quite arbitrary, in the sense that it does not at all take into account the state of the rest of the being; it has its own idea, its own will, and without any consideration for the rest of the being, it imposes this will on the being as a whole. This is what usually brings about the revolt or the petrifaction. And the only thing to do is to make the mind quiet.  And this is the time to make a movement of self-giving, full of peace, quietude, confidence. If one makes this movement of selfgiving, of complete surrender to the divine Will, all the tension arising from the effort, an effort which could be called premature or unconsidered—all the tension arising from this effort gives way. There is a relaxation in the being. And the progress one could not make by this purely mental effort usually comes about almost automatically, by the very fact that one has relaxed in confidence and self-giving to the divine Will.

Disciple: “At other times, one has the impression of making no effort, but of feeling only the presence of a consciousness due to which in many circumstances of daily life a means of progress is found. One wonders then what effort is and what its value? What we call effort—isn’t it too mental a movement?”

Mother: That is exactly what I have just explained, which shows that the observation is quite correct.

It is an arbitrary decision of the mind, and being arbitrary and not in conformity with the truth of things, it naturally brings about these wrong reactions. This does not imply that no effort must ever be made but the effort also must be spontaneous. So too I told you once that for meditation to be effective, it must be a spontaneous meditation which takes hold of you rather than one you make an effort to have; well, effort, that kind of tension of the will in the being, must also be something spontaneous, and not the result of a more or less inopportune mental decision[2].

There are some similar issues discussed under “Surrender : passive versus active“.

7 thoughts on “The equipoise required for Yoga”